Then the Bond Market Said, “Hold My Beer…”

Things continued to happen in financial markets this week after stocks ended the previous week with one of the largest weekly declines on record.

Not to be outdone, bonds took center stage this week as U.S. 10-year and 30-year Treasuries had incredible drops to their lowest levels ever.

The 10-year Treasury note ended the week at 0.75%, a full two percent lower than it was just a year ago. 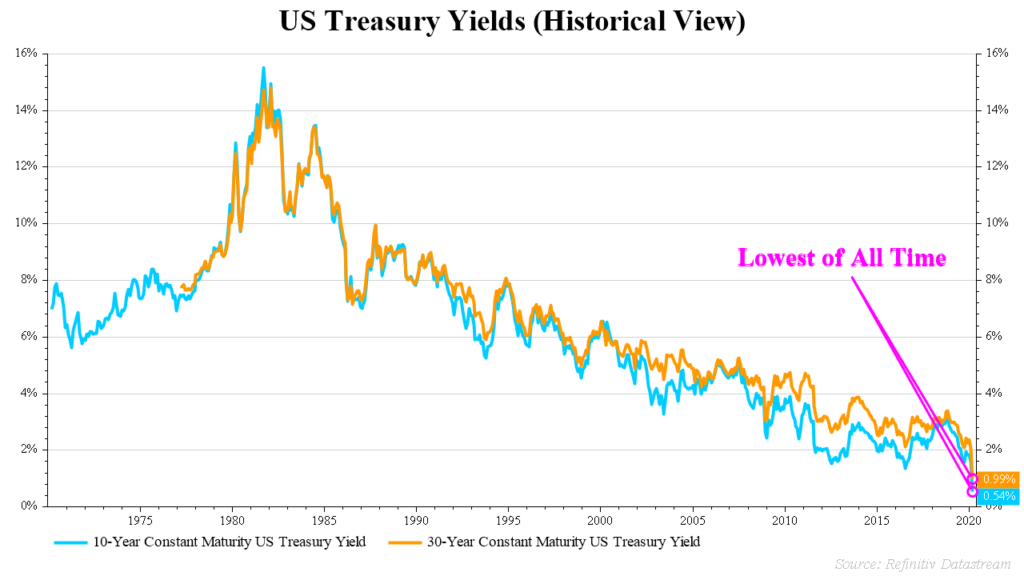 This drove price gains in intermediate-term treasuries of over three percent for the week since bond prices go up as yields go down.

The 30-year Treasury bond ended the week at an unbelievable 1.25%.  The price gains seen on these long-term treasuries was a stunning 8.5% for the week, putting their total return year-to-date at 25%!

Bonds of most types performed well against this backdrop.  TIPS and corporate indexes were both up around two percent.  High yield bonds were the underperformer, losing a half percent for the week.

Volatility in stocks continued.  The U.S. market, as represented by the S&P 500 index, finished the week up just over half of a percent.  This small gain masks the huge swings experienced throughout the week.

To give a sense of this, the average intraday range seen in the Dow Jones Industrial Average was a whopping 1,000 points.  For additional context, this past week saw four of the fifteen largest price changes that the Dow has ever experienced!

Most stocks experienced this heightened volatility and closed with small gains on the week.  Small-cap U.S. stocks were the exception, underperforming with a two-percent weekly loss.

Broad commodity indexes were down about a half of a percent, though individual commodities saw a large range of outcomes.

Oil fell nearly eight percent, extending its year-to-date decline to over 30%!  This volatility seems likely to stick around as OPEC and Russia seem to be at odds on what to do regarding production.

Gold continued its rally, gaining nearly 7% for the week and is now up close to 10% year-to-date.

Stair Up, Elevator Down – It is no surprise that the greatest deterioration we have seen in our risk models has been in the price movement component.

Even though stocks finished slightly up this week, we still saw basically eight months of gains wiped out in just over a week. 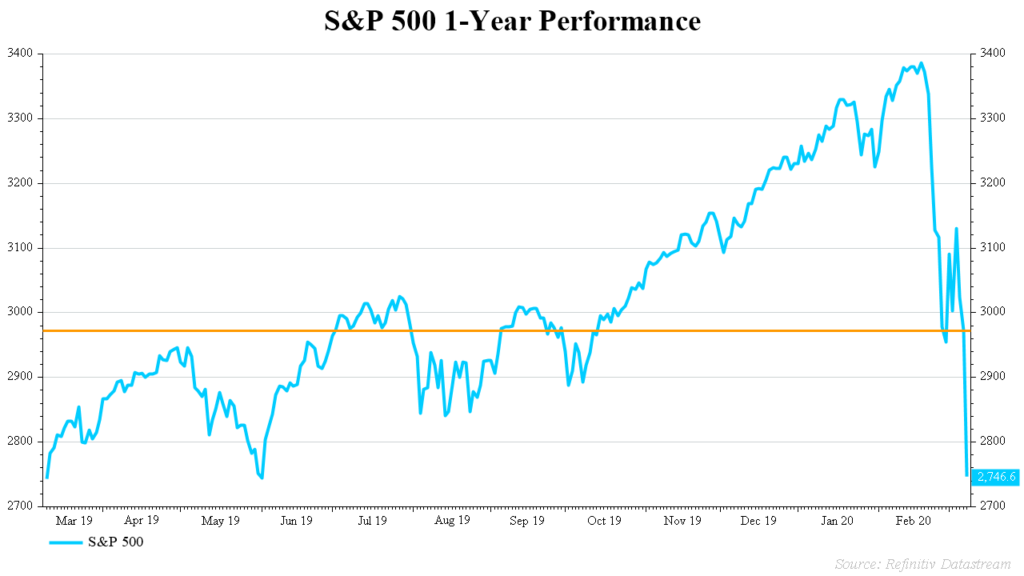 As it stands now, the uptrend has been broken and the rally that started in the fourth quarter of 2018 no longer gets the benefit of the doubt.

We will need to see any rebound prove itself and reestablish this uptrend to convince our models that the coast is clear.

And Yet… – One of the surprising things about this recent decline is that by most measures of investor behavior, we are still far from showing extreme pessimism.

Extreme pessimism is one thing that our models look for in order to start adding risk exposure back after a market decline.

In part, this is likely due to the swiftness of the decline.

Many ways we measure pessimism – survey, volatility, oversold extremes – have some sort of smoothing applied.  In other words, we look at an average over a few weeks instead of a single point in time.

Because of this, we will likely need to see additional time pass before these metrics start turning.

Predictions are Hard, Especially About the Future – We can’t say for sure what is going to happen.  However, it is times like these that prudent risk management techniques show their usefulness.

In our managed accounts, exposure to risk assets was reduced in the early stages of this decline as per our measures or risk.

This has happened many times over the past 10 years of this bull market, and it has often turned out that this risk management was unnecessary as the market continued to moved higher.

We aren’t sure if this time will be any different, but we are confident in the process.

We don’t know what decisions will be the best, but we do know that the decisions we make will allow us to facilitate good outcomes in many different situations.

The post Then the Bond Market Said, “Hold My Beer…” first appeared on NelsonCorp.com.