The U.S. stock market notched a week of strong gains, giving investors a reprieve after a prolonged bout of volatility. The S&P 500 rose 1.94%, while the Dow Jones Industrial Average added 0.77%. The tech-heavy Nasdaq Composite surged 4.56%, scoring five straight days of gains, its longest winning streak of the year.

The S&P 500’s technology and communications services groups have been among the biggest winners in recent sessions. Sure enough, growth stocks led the rally last week as the Russell 3000 Growth index gained 3.75%. The Russell 300 Value index gained a smaller 0.39%.

Foreign stocks notched small gains for the week. The MSCI EAFE index of developed country stocks rose 0.94%, and the MSCI EM index of emerging market stocks inched ahead by 0.68%.

Over in the bond market, the 10-2 Treasury yield curve inverted for the second time this year, a sign that investors think a recession will likely occur in the U.S. in the coming months. While the 10-year Treasury yield rose to 3.09%, the 2-year rose even further to 3.12%. The result was steep losses for intermediate- and long-term Treasuries and a slight 0.5% loss for investment-grade corporate bonds. High-yield bonds, however, rose about 1.33%.

Here’s a good one, for example. In 2021, global GDP was estimated to have grown by 6.3% in real terms, its fastest rate in almost 50 years. But now, we are experiencing the sharpest slowdown in growth in 80 years.

The BIS further states that the combination of inflationary and recessionary forces that we are currently facing, along with financial stability risk, is “historically unprecedented.”

In other words, as the economic historian Adam Tooze recently summarized, “in the last 18 months, we have seen the fastest global growth in 50 years, followed by the most rapid slowdown, creating what is, in the BIS’s view, a global economic configuration unprecedented in history.”

Tooze further states that “if you aren’t puzzled, you don’t get it… Admitting to disorientation is a sign of honesty and realism.”

Disorienting. That feels like a pretty good way of describing things.

But to help, I think we can bucket the issues facing investors into three key categories: slowing growth, stubborn inflation, and unfriendly central banks.

The first bucket is slowing growth. As I talked about last week, it looks like U.S. GDP is set to contract slightly for a second straight quarter. Whether the NBER calls this a recession or not remains to be seen. But nonetheless, we have seen more evidence mount over the past month that economic growth is at the very least slowing down.

As the chart below shows, both ISM Manufacturing and Services PMIs fell in June, a sign of slowing private sector activity. The simple average of the two indexes hit its lowest level since May 2020.

The good news is that this is still above 50, a level signifying economic expansion. The bad news, however, is that it has undoubtedly slowed quite a bit—and the trend in the series is clearly to the downside.

But here’s the thing: the job market remains remarkably tight. The latest figures show 11.25 million job openings compared to just 5.9 million unemployed persons in the U.S. That’s a ratio of 1.9 open jobs for every unemployed person. This will continue to put upwards pressure on inflation.

Sure enough, as our second chart shows, inflation remains stubbornly high. While the ISM Price index fell last month to a 4-month low, it remains in a high-inflation zone. In other words, input costs may have eased from peak levels, but not by enough that it would signal an all-clear sign for stocks. 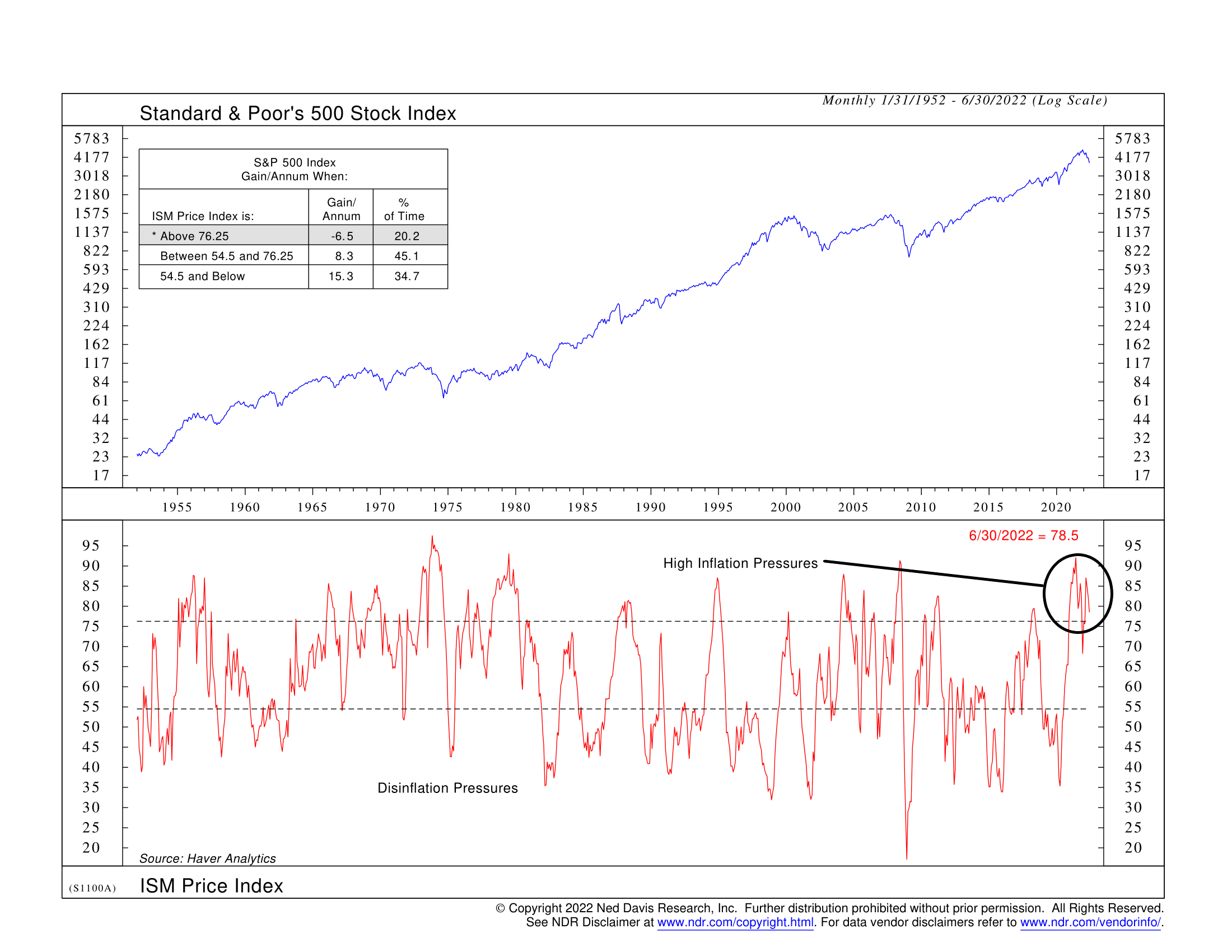 Which brings us to our final area of concern: unfriendly central banks. The orange line in the bottom clip of our chart below shows the percentage of central banks worldwide whose last rate change was a decrease.

As you can see, it’s fallen to about 24%. That’s down sharply from nearly 100% during the peak of the pandemic. In other words, most central banks around the world are tightening monetary policy (i.e., providing less stimulus to the economy and, in turn, stock markets).

From the BIS’s perspective, this is concerning because they worry that in order to tame the unfamiliar forces conflicting the world economy, central banks have resorted to monetary tightening that could result in very large real economic costs.

For stock investors, the worry is that central banks might not swoop in and save the day as they have in past stock market downturns. If central banks can’t or won’t cut rates because inflation remains stubbornly high, economic growth and stock prices could suffer.

The bottom line is that the current state of the world is strange, unprecedented, and perhaps downright disorienting. There are signs of slowing economic growth, but not in the areas that we would traditionally expect (I’m looking at you, labor market). Inflation remains stubbornly high but shows signs of peaking in some areas. And monetary policy, which has historically reversed course and helped out in past downturns, might not be willing or able to save the day this time around.

All this points to an uncertain and volatile environment for financial markets. And until we get more certainty on where economic growth and inflation go from here, we should probably expect more of the same.