Falling volatility has helped, as the VIX index dropped below 17 last week, its lowest level since February of last year.

The resurgent strength in tech was evidenced by the 3.7% gain in growth stocks, as well as the 3.3% rise in large-cap stock prices.

Despite the recent announcement that producer prices surged 1% last month, inflation worries were relatively subdued.  The 10-year Treasury yield was down almost six basis points on the week, to 1.66%.

Forward Ho! Corporate America – Earnings season ramps us this week as some major companies report their profit numbers for the first quarter of 2021—and it looks to be a good one.

According to FactSet, companies in the S&P 500 stock price index are expected to report first-quarter earnings growth of 24.5% from a year earlier.

This shouldn’t be too surprising, as profits are being measured against the three-month period last year that included the onset of the pandemic and the subsequent shutdown of American businesses.

Nonetheless, since the start of the year, analysts have continually become more upbeat about profit growth this past quarter, raising their estimates from 16% at the end of December to 24.5% currently.

Many of the indicators that we follow are confirming this positive sentiment, including the one below, which shows the relationship between corporate bond credit spreads and corporate earnings. 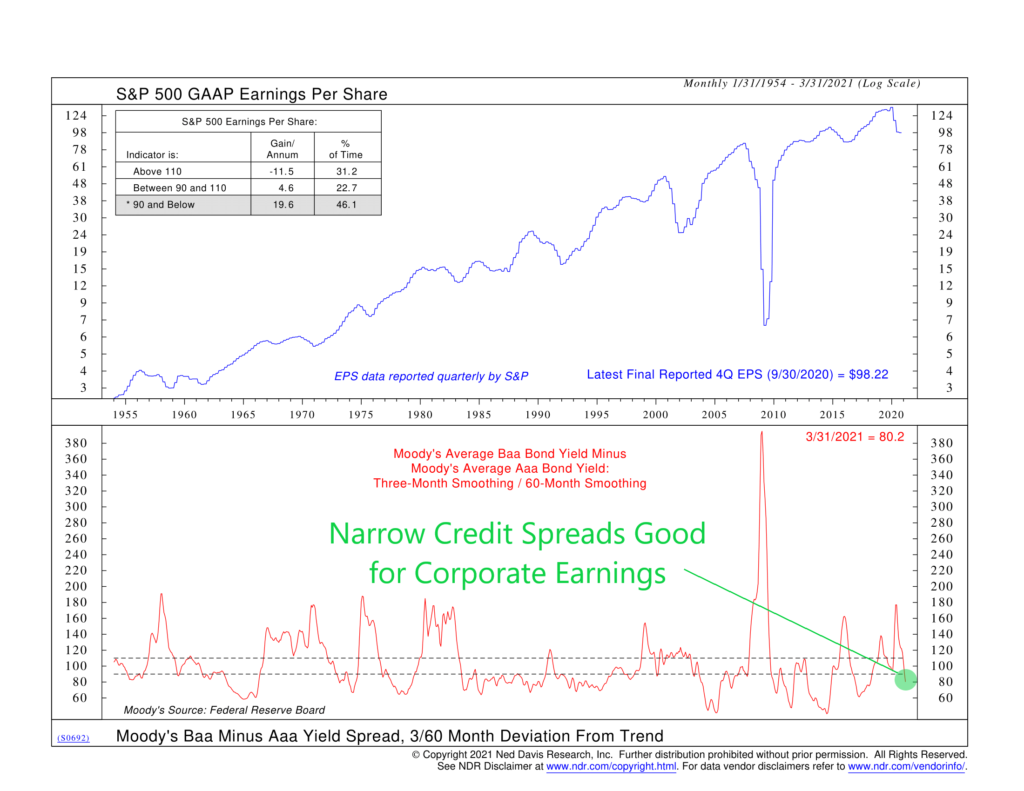 The top clip of the chart shows the earnings per share of the S&P 500 constituents over the past four quarters.  The bottom clip shows the difference in yields between medium-grade corporate bonds and top-grade corporate bonds.  More specifically, it’s a deviation-from-indicator, so it divides the spread’s three-month moving average by its 60-month moving average; this dampens the variability of the spread.  Historically, when the spread is high, S&P 500 earnings have been negative, on average.  But when the spread is low, earnings have been especially strong.

If that’s confusing, here’s the main takeaway: If the indicator is falling—as it is now—it means corporate bond spreads are narrowing, a sign that investors aren’t demanding as much compensation for investing in less creditworthy companies; generally, this is because economic growth, and thus corporate earnings, are expected to be strong.

So, things are looking up for corporate America.  One risk, though, is that stocks already look quite pricey going into earnings season.  The S&P 500 stock price index is currently trading at 22.6 times its projected earnings over the next 12 months, above its five-year average of 18.14.  The market could give back some of its recent gains if earnings announcements disappoint or if the outlooks from company management are less optimistic.  Or maybe all the good news has already been priced in?

Maybe.  But even if earnings grow faster than stock prices, we could still see prices rise at a slower but still positive pace while multiples compress to more comforting levels.  For investors, that would be welcome.