The Dow Jones Industrial Average lagged behind the broader market, gaining about 0.66 percent, whereas the Nasdaq Composite shot ahead and gained 1.75 percent.

Developed country stocks, however, ended the week in negative territory, dropping roughly a tenth of a percent.

Interest rates ticked up a bit on the long end of the yield curve, resulting in negative weekly returns for intermediate- and long-term Treasury bonds.

The Bloomberg Commodity Index fell about 0.81 percent, mostly due to the pullback in the price of oil. Gold, however, continued its ascent, rising another 0.74 percent.

The U.S. dollar ticked up by about 0.38 percent for the week.

Rounding the CAPE: Are Stocks Overvalued? –

In theory, the value of a stock is closely related to the fundamentals of its underlying company.

If the price of the stock trades too far above its fundamental value, it is considered overvalued, too far below, and it might be undervalued.

But how exactly do we measure fundamental value?

We could use the earnings of the company. If we compare the price of the stock to the companies’ annual earnings, we reveal how much investors are willing to pay for each dollar of earnings the company generates. This is known as a P/E ratio.

A popular P/E ratio used among finance professionals is the CAPE ratio or the Cyclically Adjusted Price-to-Earnings ratio. It is also known as the Shiller P/E ratio due to the work by Dr. Robert Shiller at Yale University.

To calculate the CAPE ratio, we take the last ten years of earnings for all of the companies in the S&P 500 Index. We then adjust those earnings for inflation to get what is called real earnings.

Finally, we divide the current market capitalization of the index by the average annual real earnings to get the ratio.

So what is the CAPE ratio currently?

Using history as a guide, the projected 10-year real returns for stocks when the CAPE ratio is above 30 is near zero.

So, by this measure, the U.S. stock market is quite overvalued, and we should temper our expectations for future returns.

There is reason to take pause, however. In recent years, the CAPE ratio has done an increasingly poor job of predicting future returns.

There are many criticisms of the metric itself, most of which I won’t get into here, but one of the reasons stocks might justify higher prices relative to earnings is due to the persistent reduction in interest rates.

As the chart below shows, the average Federal Funds rate since about 1970 is roughly 5.63 percent versus 1.75 percent today. 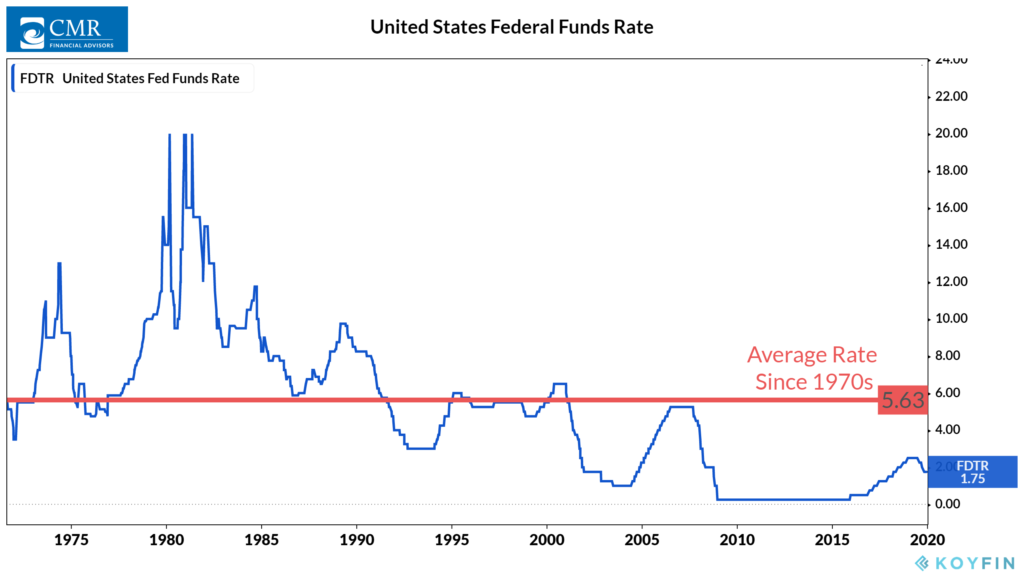 This is the rate the Federal Reserve directly influences, and it has come down substantially over the years.

One might expect stocks to trade at higher valuations in a time when fixed-income investments are yielding so little.

The current yield on the 10-Year Treasury Note is around 1.85 percent.

So, from a relative standpoint, the earnings from stocks still look quite attractive compared to bonds at current prices.

As long as the trend in stock prices hold up, the underlying economy is still growing, and interest rates remain so low, the market might even grind higher despite its seemingly high valuation.

The post Rounding the CAPE first appeared on NelsonCorp.com.