U.S. stocks rose for a fourth consecutive week as a rally in large-cap growth stocks pulled the major indices higher. The S&P 500 gained 1.33%, the Dow rose 0.4%, and the Nasdaq surged 2.7%.

Real estate was flat for the week. Commodities were weak, with the broad-based index falling 0.38%. The U.S. dollar rose about 0.5%.

Seperate Ways – Halloween may be over, but central banks around the world are giving investors a fright.

Last week, the Bank of Canada surprised investors with an announcement to outright end their asset purchases when they had previously been expected to taper them more gradually. They also pulled forward the timing of their first interest rate hike to the middle of next year.

Across the pond, the Bank of England is under pressure to raise rates to deal with inflation before the year is over. And in emerging markets, where inflation risk is the highest, the hiking cycle has already begun. Down south, in Brazil, the central bank announced a massive—and largely unexpected—rate hike of 1.5% last week.

The following chart sums up the breadth of these central bank policy changes quite nicely. Specifically, it measures the percentage of central banks worldwide whose last rate change was a decrease. 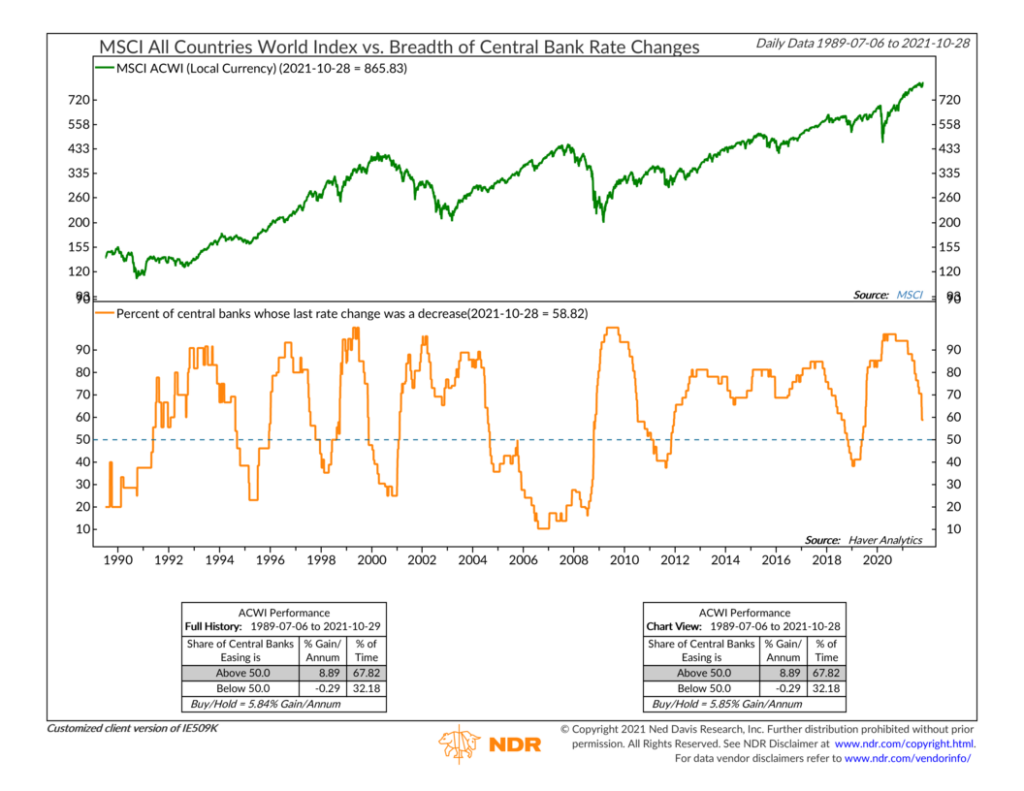 Last October, as the world economy was still in the early phases of recovering from the recession, the percentage was more than 90%. Fast forward to today, however, and that number has dropped to about 58%. In other words, central banks are going their separate ways as far as monetary policy is concerned.

Ultimately, this means that global stock market performance could get bumpier in the years ahead. Historically, when the percentage of central banks that are lowering rates has dropped below 50%, it has resulted in negative annualized returns for global stock prices, on average.

When viewed through this lens, then, monetary policy in the United States still looks pretty accommodative relative to the rest of the world. Sure, the Federal Reserve just might announce this week that it intends to start tapering its asset purchases of $120 billion a month of Treasury and agency mortgage-backed securities. But the short-term rates market is only expecting about two 25-basis-point increases in the Fed’s funds rate by the end of 2022. If the neutral rate is 2.5%, as the Fed reckons, a fed funds rate of 0.50%-0.75% is far from restrictive.

Indeed, as the chart below shows, the U.S. stock market has further widened its outperformance versus the rest of the world this year. The MSCI USA Index (green line) is up about 22% this year, relative to the roughly 10% gain for the MSCI World Ex USA Index (gold line).

There are various reasons why the U.S. continues to dominate the rest of the world’s stock markets—with earnings growth being perhaps the biggest reason. But it’s also partly explained by the fact that the Federal Reserve has been much more lenient in the face of higher inflation than the other central banks. By keeping rates low and allowing inflation to run hotter for a longer period of time, the Fed has helped bolster the U.S. economy and, in turn, the stock market.