The S&P 500 rose about 0.6 percent last week but was outdone by the Dow Jones Industrial Average’s gain of roughly 1.8 percent.

Bonds had a rough week as the yield on the 10-year Treasury note rose to 0.709 percent after being just 0.568 percent the prior week.

Commodities had a decent week, led higher by gains in corn and oil, but gold dropped over 3.5 percent to end the week.

And finally, the U.S. dollar dropped about a fifth of a percent, continuing its recent string of poor performance.

“Re-Open” Takes Center Stage – The S&P 500 has rallied nicely over the past five months and is now nearing all-time highs. However, the stocks leading the rally have waxed and waned during this period.

If we look more closely, we see that this rally has been comprised of three separate sub-rallies or Acts, if you will. The recent rotation into the “re-open” stocks perhaps marks the beginning of a fourth act.

The rally started with a bang in Act I, as the Tech, Health Care, and Energy stocks surged ahead and propelled the broader market higher. These were the so-called “COVID Economy” stocks. 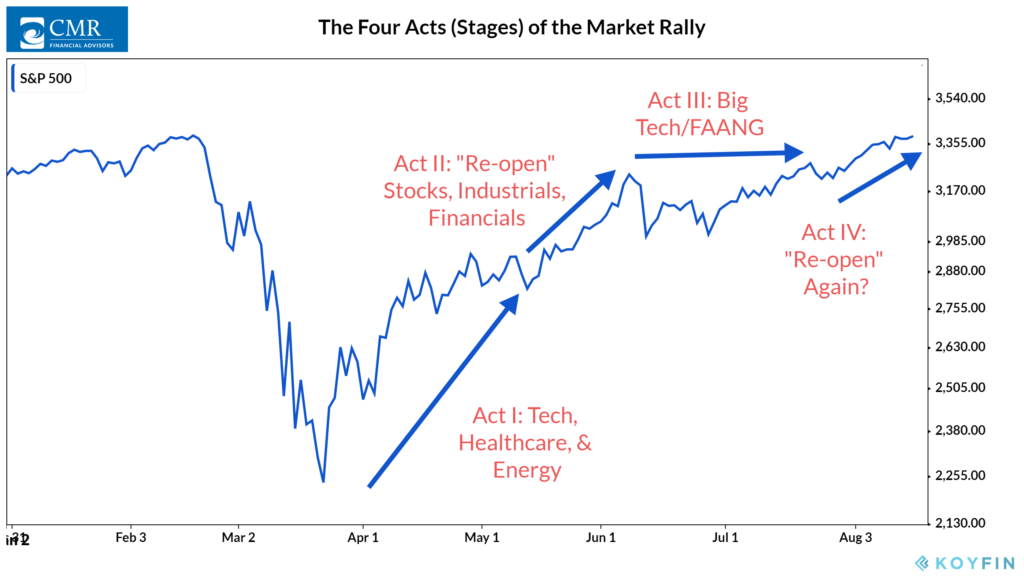 This lasted until May; then, the “re-open” stocks took over. During this rally, stocks tied to businesses that had suffered when the economy shut down — such as Industrials, Financials, and Transportation — began to climb higher as the economy opened up.

And now, we see a resurgence in the “re-open” stocks, with Industrials, Transports, and Financials taking the lead once again.

As the chart below shows, the Dow Jones Transportation Average (airlines, railroads, and trucking companies) and the Russell 2000 index (economically sensitive small-cap stocks) have outperformed the S&P 500 and Nasdaq Composite over the past few weeks. 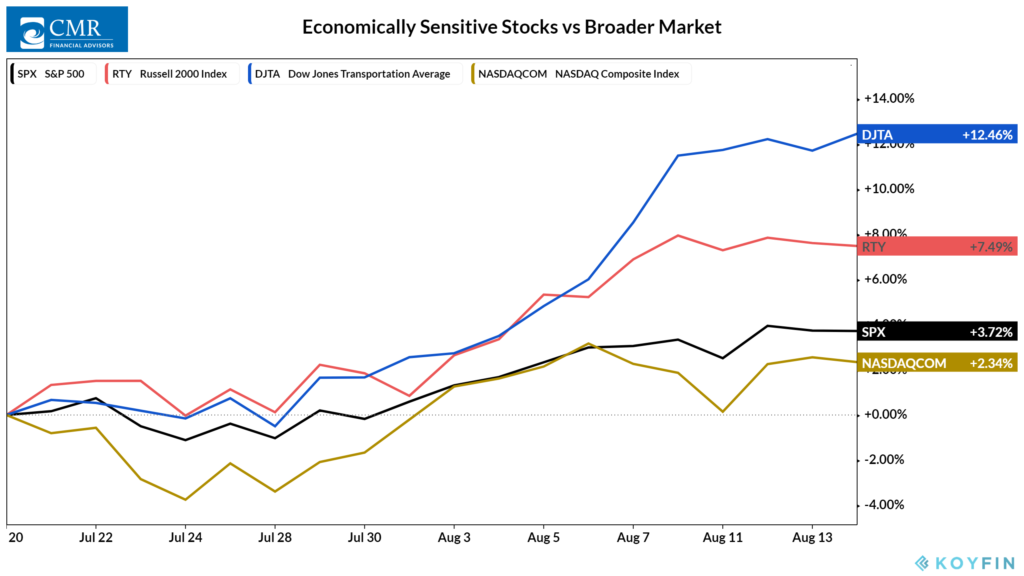 The recent rally can be viewed as a renewed confidence among investors that the economic recovery is going better than expected. According to FactSet, more than 80 percent of the S&P 500 companies that have posted earnings beat analysts’ expectations.

More so, gains in transport stocks are often a good sign for the broader market because these companies move the goods and materials around the world that are needed to keep the economy truckin’ along (pardon the pun).

Whether or not this recent outperformance by economically sensitive stocks is an actual coup de theatre remains unclear. Nonetheless, seeing more breadth and participation in the market rally is usually a positive sign for the bull market’s staying power.