The divergence between growth and value stocks was particularly notable.  Growth stocks fell about 1.94%, while value stocks gained around 2.7%.

In the foreign space, developed country stocks declined 0.62%, while emerging market stocks were essentially unchanged for the week.

The yield on the 10-year Treasury note jumped to 1.58%, up from 1.41% the prior week.  Bond returns were negative across the board.

Commodities had a mixed week, as oil saw large gains of over 7.5%, but corn and gold posting moderate declines.

The U.S. dollar strengthened by about 1%.

Passing the Baton – The tech-heavy Nasdaq nearly fell into correction territory last week, meaning it was about 10% off its peak.  However, the S&P 500, which has a smaller tech concentration than the Nasdaq, actually ended the week higher.  It is currently less than 3% from its all-time high.

To shed some light on why this might be the case, let’s look at the recent history of growth stocks versus value stocks.

Over the past decade, growth stocks have obliterated value stocks by a pretty significant margin, as shown in the chart below.  The S&P 1500 Growth index has returned about 321% over the past ten years, versus a 181% gain for the S&P 1500 Value index. 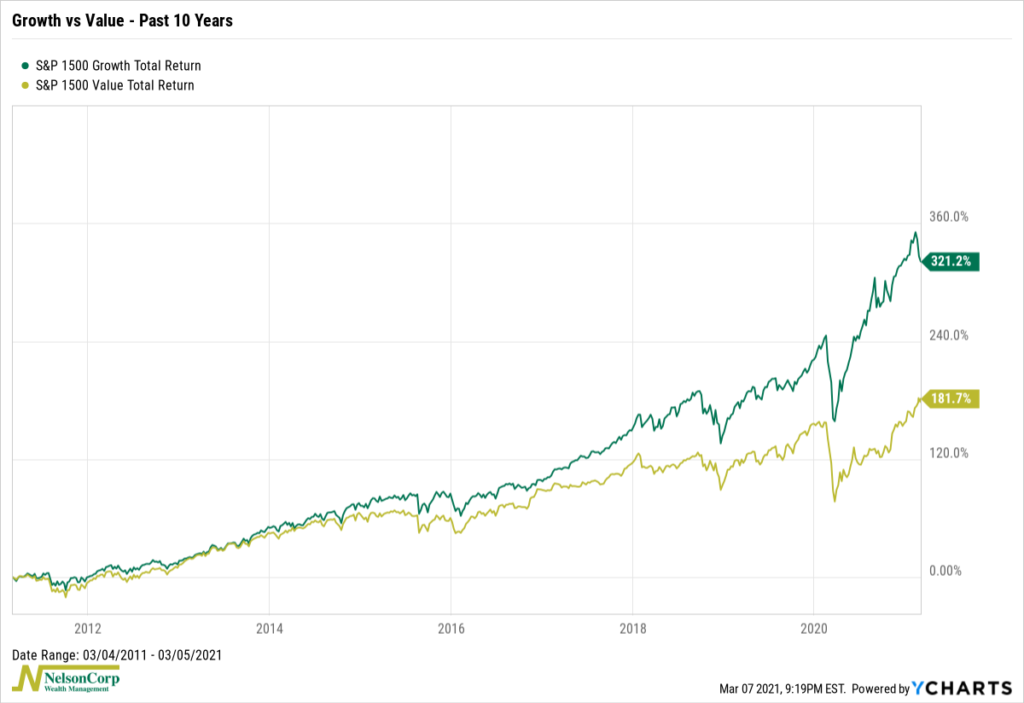 The decline in interest rates over this same period has had something to do with this divergence in returns.  Falling rates tend to correspond with sluggish economic growth, so when growth is scarce, investors are willing to pay up for the handful of companies that can promise strong future sales and earnings growth.  More so, when rates are low, the discount rate that gets applied to these future cash flows is low, thus making the present value of future cash flows higher.

This is one reason why the recent rise in interest rates has suddenly thrown a spanner in the works.  If rates are no longer falling, the idea of paying up for growth stocks with earnings far into the future becomes less appealing.  Additionally, since the economy is showing signs of strong economic growth, value stocks, which tend to be more cyclical in nature, start to attract more capital.

Indeed, when we look at the performance of growth versus value stocks more recently, we see that value stocks have outperformed growth stocks by a decent margin over the past six months. 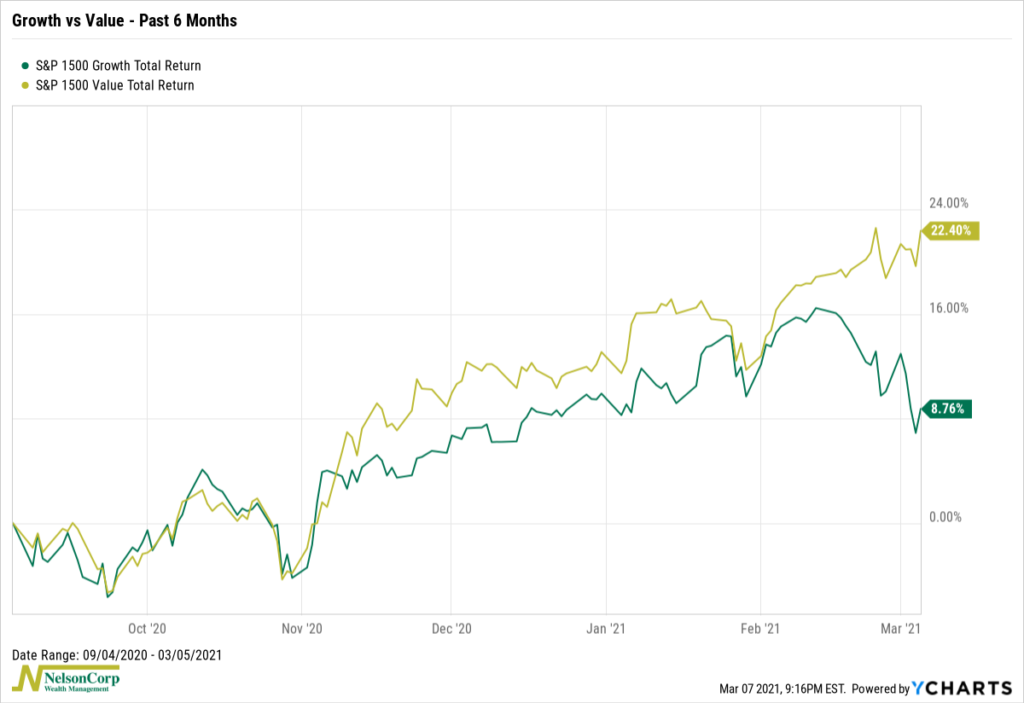 This is an interesting development that is worth watching in the coming months.  If rates continue to rise and economic growth remains strong, value stocks could outperform.  Of course, this could be a false start, as there have been other head fakes in the past. But if rates keep rising and economic growth remains strong, the case for value is relatively compelling.

The post Passing the Baton first appeared on NelsonCorp.com.