Volatility continued to plague Wall Street last week. The VIX, or the “Fear Index,” rose back above 30 as investors anticipate volatility will continue in the coming weeks.

Foreign stocks had a rough go as well. Developed country stocks fell 5.75% for the week, and emerging markets declined 4.74%.

Yields continued to climb over in the bond market. The 10-year Treasury note’s yield rose to 3.24%, up from 3.14% the week before. Intermediate-term Treasuries declined 0.6%, and long-term Treasuries fell 1.7%. Investment-grade corporate bonds suffered declines of roughly 1.2%, and high-yield (junk) bonds fell 2.9%.

Misery Loves Company – In the 1970s, the economist Arthur Okun invented an economic indicator called the “Misery Index.” It’s a simple measure comprised of two components: the unemployment rate and the annual inflation rate. Add them together, and you get a number that rises when the economic distress felt by everyday people goes up.

To be fair, it’s a crude and imprecise metric. But it is convenient and straightforward to understand. People are worse off when inflation is high; the same goes for when they are out of a job. So, it makes sense that if both unemployment and inflation are high simultaneously, the average person is probably feeling quite miserable.

It’s no coincidence that the Misery Index was popularized in the 1970s. This was a time when something called “stagflation” wreaked havoc on the American economy. Both inflation and unemployment were sky-high during this period. The Misery Index soared to record-high levels as a consequence, as seen on the chart below. 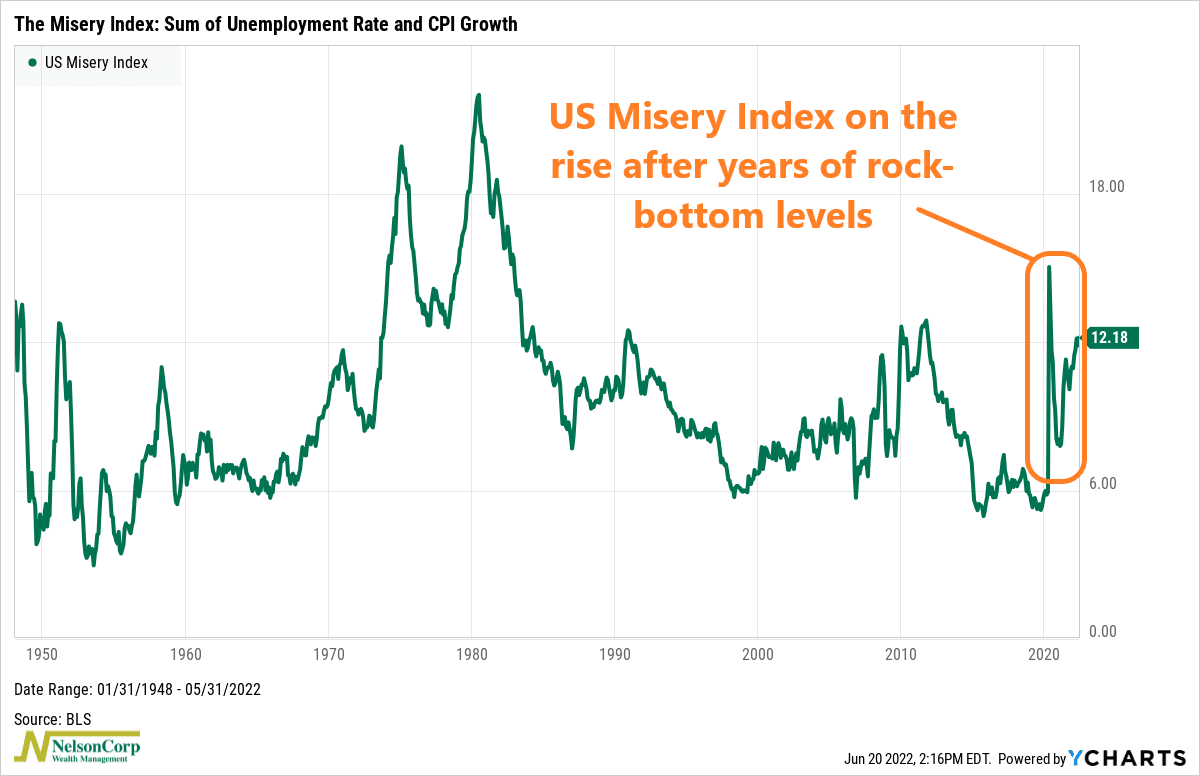 What you might also notice from the chart, however, is that the Misery Index is once again getting pretty high.

Starting around 2011, it dropped precipitously and hovered near record-low levels for many years. Unemployment and inflation were low. Then the Covid-Recession hit, and we got a sharp spike as unemployment rose quickly and fell just as quickly. Now, however, the Misery Index is steadily moving higher, despite very low unemployment levels.

The reason, of course, is inflation. Last month, the annual rate of inflation reached 8.58%. Add that to the 3.6% unemployment rate in America, and we get the current Misery Index reading of 12.18%.

Ask a random person on the street how they feel about the economy right now, and they’ll likely say it’s pretty miserable, so this makes sense. If there is a silver lining, however, it’s that 70% of the Misery Index is due to inflation. Unemployment isn’t driving that many people into misery right now, unlike the stagflation situation in the 1970s.

Nonetheless, it’s still troublesome. And it isn’t just an American phenomenon either. As the chart below shows, 100% of the countries measured by this particular breadth indicator have a Misery Index reading above their 5-year average. That’s the highest reading on record, with data going back to 1996. So, it appears the saying is true: misery loves company. 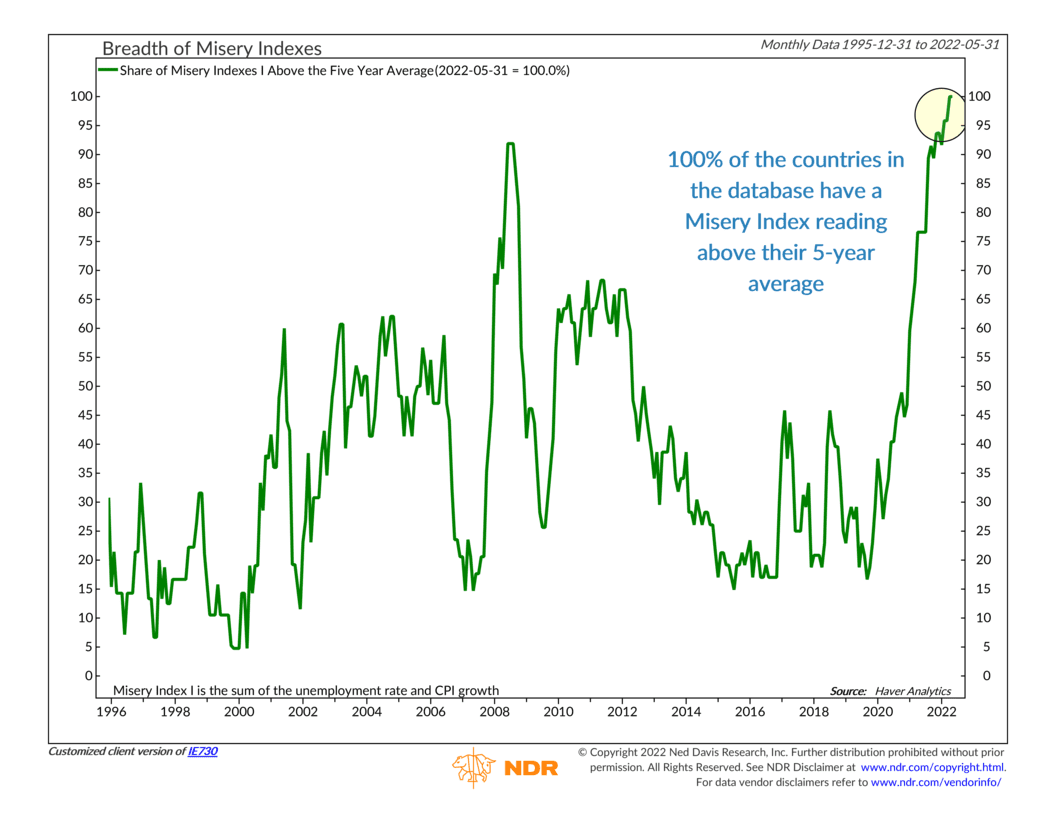 Of course, the goal of policymakers around the world is to find a way to bring this Misery Index back down. In America, that tricky task lies with the Federal Reserve. It raised its benchmark interest rate 75 basis points this week, the biggest hike in 28 years.

The question is: Can the Fed raise rates and destroy demand just enough to reduce inflation without simultaneously crashing the economy and increasing unemployment? This so-called “soft landing” is the holy grail of monetary policy. It’s possible, but it won’t be easy.

It’s also just as likely that we end up in a world where the Fed does succeed in getting Americans to spend less, borrow less, and loan less—and yet the price of oil and other goods stays high. Then we would have the worst of both worlds: slower growth and higher prices. That’s the dreaded stagflation phenomenon, a recipe for a higher Misery Index.

All this uncertainty makes for a much more challenging investing environment than we’ve been used to in recent history.