From the Short to the Long of It

From the Short to the Long of It – This week, I thought it would be worthwhile to talk about a few indicators that track the stock market over various time frames—the short, intermediate, and long term.

First, let’s look at the short term. Stocks have been on a tear in recent weeks. The S&P 500 index of large-cap stocks is up nearly 9% in the past month. Furthermore, the index has had a positive return in 16 of the last 18 trading sessions. Not too shabby.

But here’s the catch. Such strong performance in a short amount of time can produce overbought conditions. The chart below shows the S&P 500’s 14-day Relative Strength Index (RSI).

This is a momentum indicator that measures overbought/oversold conditions over a time frame of a few weeks. The RSI’s current reading is over 77. Historically, readings above 70 have been a sign that momentum has gotten out of hand. Therefore, we are getting a potential warning sign that the stock market is overbought in the short term.

I highlighted the last two times the RSI got this high over the past two years, and both times the market suffered poor returns in the subsequent weeks. The implication, then, is that the solid recent price action might have been too much of a good thing, so returns could be harder to come by in the following weeks.

With that said, however, the outlook for the stock market does look rosier over the intermediate term—and the reason lies with corporate earnings.

Earnings have been phenomenal this year. According to FactSet, the companies that comprise the S&P 500 index are now reporting the third-highest (year-over-year) growth in earnings since the second quarter of 2010.

And the stock market has surged alongside earnings. This next chart shows how far (in percentage terms) the S&P 500 is trading above or below its 200-day average price. (200 trading days is about ten months, so it’s a good representation for what we would call the intermediate or medium term.) 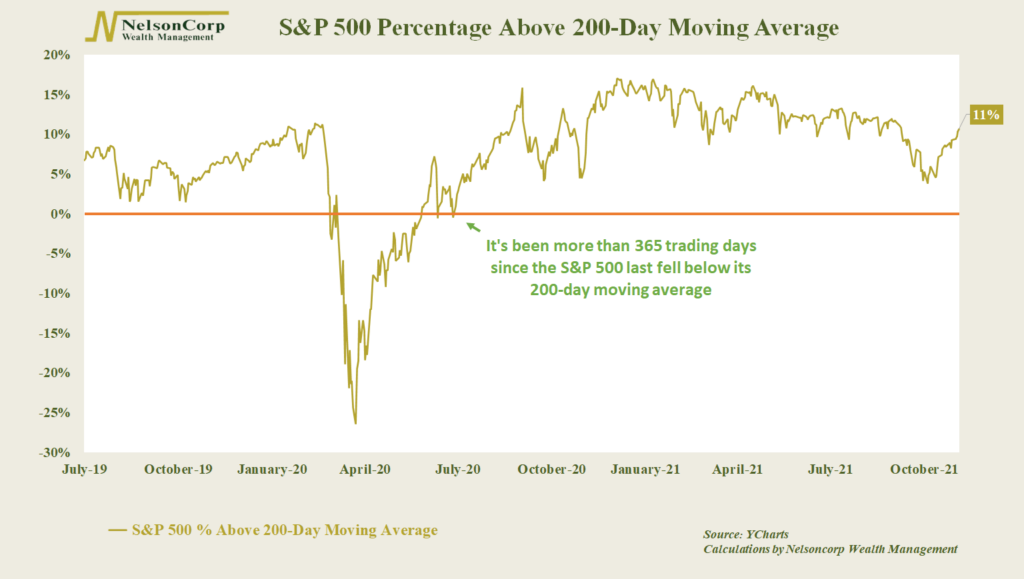 As the chart points out, it has been more than 365 trading days since the S&P was last trading below its average 200-day price. Talk about strong price action!

This measure had been trending lower since about April, but it recently reversed course and is heading higher. Right now, the S&P 500 is about 11% above its average 200-day price.

The takeaway from all this is that, over the medium-term, we’d say the market’s technical health remains fairly bullish.

And last, we have the long term. This one is harder to assess. As John Maynard Keynes, the economist, famously said, “in the long run, we’re all dead.” Nevertheless, it’s still helpful to take a step back and see where things stand from a high-level perspective.

For this, valuation indicators can play a role. And perhaps the most famous valuation indicator is the S&P 500 Shiller CAPE ratio, shown in the chart below. This is a price-to-earnings ratio that uses inflation-adjusted earnings from the previous ten years. In other words, it gauges how undervalued or overvalued the stock market is by comparing its current price to its historical earnings record.

As the chart reveals, the Shiller CAPE ratio has risen to nearly 40, the highest it’s been since 2000. Historically, the higher the CAPE ratio, the lower the S&P 500’s returns have been over the next 10 to 20 years. That’s something to keep in mind for the very long term.

So there’s our quick overview of where the market stands based on various time frames. It’s sort of mixed right now. But overall, we tend to focus more on the intermediate term, where our modeling process produces the most “bang for the buck.” The good news from that perspective is that the intermediate term happens to be the most bullish of time frames at the moment.

However, the bigger takeaway is that the market’s attractiveness can vary depending on your time frame. For that reason, we take a weight-of-the-evidence approach to our risk management decisions, so that we are never caught off guard by the market.

The post From the Short to the Long of It first appeared on NelsonCorp.com.