Rates continued to climb in the U.S.  The 10-year Treasury yield reached 1.63%, a gain of about six basis points from the prior week.  Bond returns were poor across the board, although municipal bonds managed to gain about 0.3% for the week.

Real estate had a good week, surging ahead by roughly 5.5%.

CEOs Feeling Chipper – Despite a relatively benign CPI inflation report last week, interest rates continue to move higher in the United States.  The yield on the 10-year Treasury note, the benchmark rate at which the U.S. government borrows money, climbed to over 1.6% on Friday, its highest level in over a year.

There are signs that bond investors expect inflation to pick up further in the months ahead.  However, setting this aside, a lot of the rise in rates is due to investors pricing in stronger economic growth to come.

The recently released Chief Executive Officer (CEO) Survey from the Conference Board showed a massive jump in the first quarter of 2021 to 73%, its highest level since 1983. 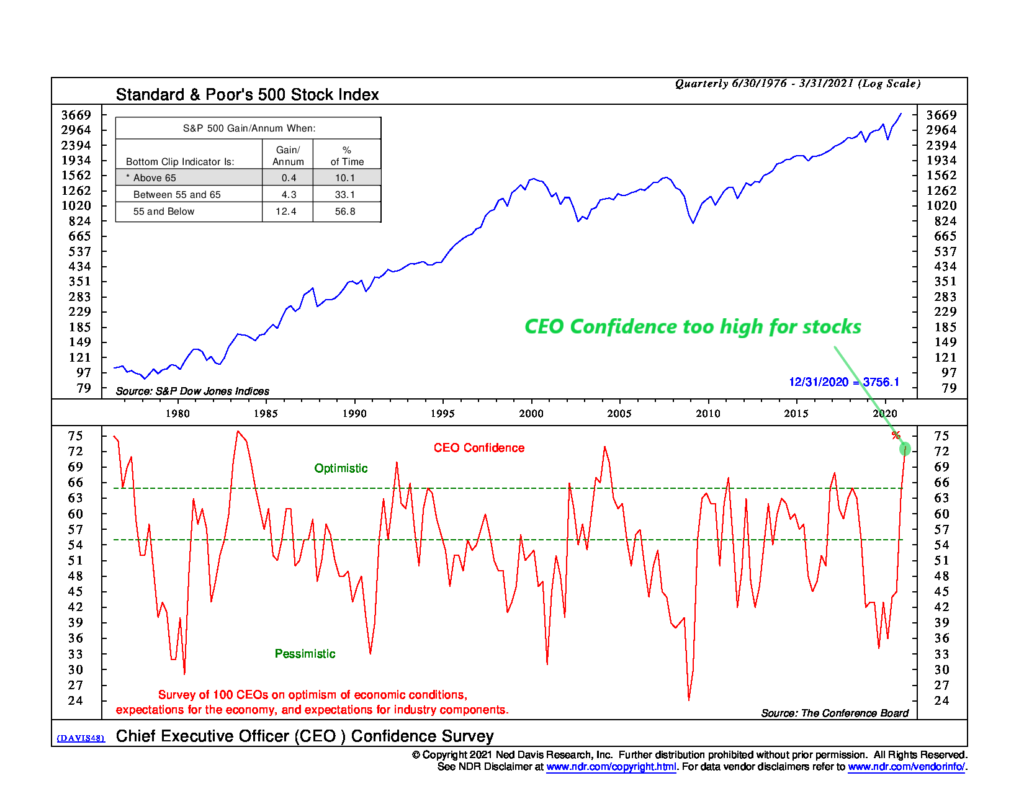 Rising CEO confidence generally coincides with rising corporate profits and investment.  But as the chart above shows, in the past when America’s CEOs have gotten too optimistic, stock market returns have been less than stellar.

This is another case of extremes in sentiment being a warning sign that things have gone too far in one direction.  The 57% of the time that CEOs have been rather pessimistic about the economy, stocks have posted double-digit gains.  But when CEOs have felt particularly good about the economy (about 10% of the time), stock returns have been essentially flat, on average.

Interestingly, though, investors aren’t quite as optimistic as America’s CEOs are.  A composite of daily sentiment indicators designed to measure short-term swings in investor psychology recently fell to a level that is considered extremely pessimistic.  (Since this is also a contrarian indicator, extreme pessimism is considered bullish for stock returns.)  Although it has since climbed back to a more neutral sentiment level, the current zone is still consistent with average stock market returns.

Ultimately, the sell-off in high-flying growth stocks the past couple of weeks has probably been good for overall market sentiment.  When it comes to stock investing, excessive optimism is something to be wary about.  So anything that throws cold water on the euphoria of the day is helpful for long-run returns.