The VIX Index, a measure of volatility, fell more than 12% for the week, further easing pressures on stocks.

Bond Market Madness – The Fed further clarified its plans for interest rates last week, resulting in some significant moves in the bond market.

Two weeks ago, Fed chair Jerome Powell had convinced the market that the seemingly hawkish statement that he had just read wasn’t that hawkish after all.

This week, however, he said the Fed is actually considering a 50-basis point hike as early as May, and possibly more to follow.

The Treasury yield curve responded to this increased sense of urgency by flattening out. In fact, it actually inverted around the “belly” of the curve, meaning the 3-year, 5-year, and 7-year Treasury rates are now higher than the 10-year rate. Even the 2-year rate is close to rising above the 10-year rate, which, historically, has been a sign that an economic recession is right around the corner.

However, according to Jerome Powell, that’s the wrong part of the curve to be focusing on. A 2018 Fed research paper noted that the shorter-term yield curve is a better predictor of recessions, so that’s what investors should really be looking at.

As you can see on the chart above, the shorter end of the Treasury yield curve is still pretty steep. That’s a good sign, according to the Fed, as it’s an indication that they think they have plenty of room to aggressively jack up rates to fight inflation without knocking economic growth.

This thesis is supported by the Bloomberg Financial Conditions Index, shown on the chart below. 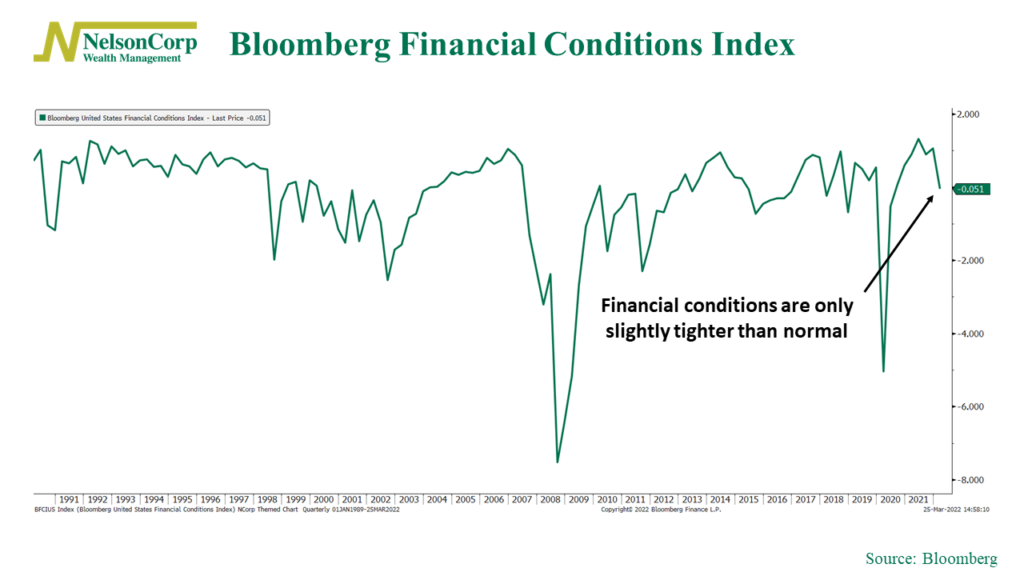 As you can see, it’s been trending down since the start of the year. But, at a reading of roughly -0.051%, it’s only slightly tighter than normal. It’s not a huge concern just yet.

As for the stock market, it hasn’t really cared either way. The S&P 500 stock index is up nearly 9% in the past two weeks.

That’s an encouraging sign. But it’s still hard to get too bullish on stocks at the moment, and that’s what most of the indicators in our models are saying. It’s not necessarily a bad time to be in stocks, but it’s not a great time either. Mostly, our models say the current environment is a neutral one for stocks.

Rising bond yields are one of the reasons why. The selloff in bonds this year has been pretty painful so far (bond prices fall as yields rise).

But here’s the thing. Although rising bond yields are bad for bond prices now, a bond’s future long-term return increases when interest rates go up. That’s how bond math works. So, if yields rise high enough, bonds look more attractive relative to stocks, all else equal. 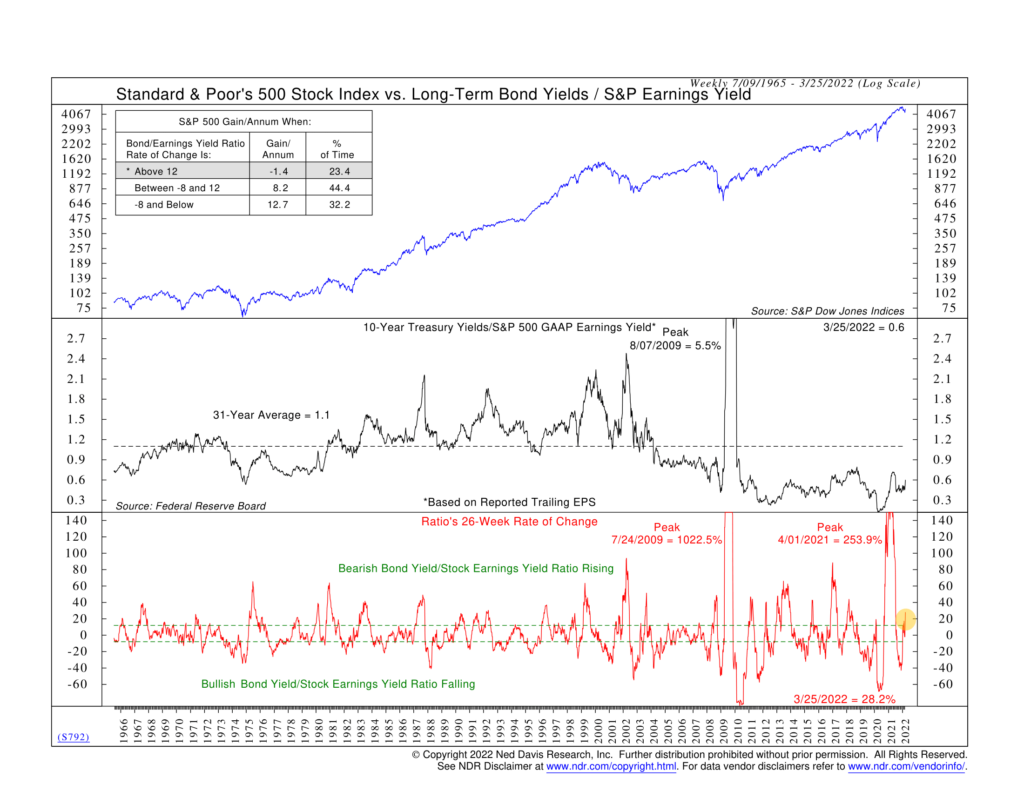 That’s the takeaway from the chart above. The middle clip shows the ratio of the 10-year U.S. Treasury yield to the S&P 500 earnings yield (inverse of the price-to-earnings ratio). And the bottom clip shows the 26-week rate of change of that ratio (i.e., its momentum). I highlighted that it recently rose above the upper bracket line. Historically, the S&P 500 has struggled when the ratio’s momentum has been this high.

So, the main takeaway is that there are reasons to support the idea that despite some parts of the Treasury yield curve inverting, the part of the curve that might matter the most is less ominous. That’s a good sign for the economy. But while the selloff in bonds has been rough for bondholders so far this year, rising rates make them look more attractive—especially when compared to the current earnings yield of the stock market—so stocks are still mostly a neutral risk at this time.